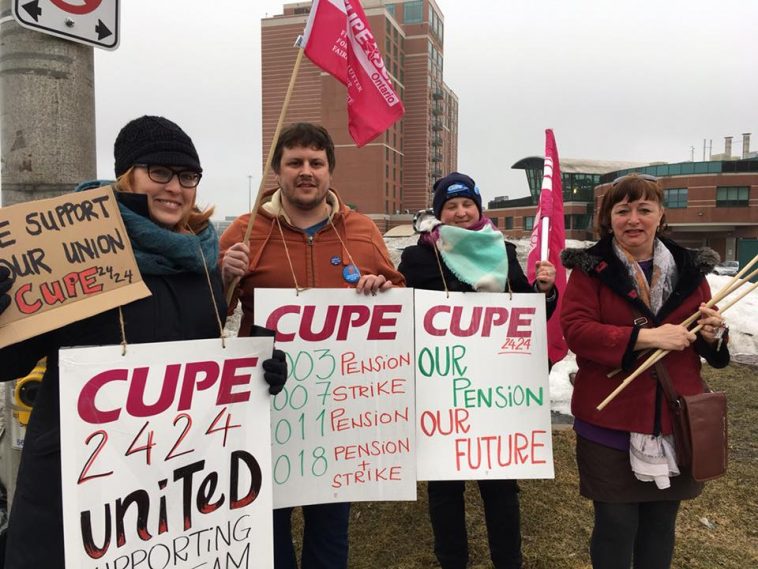 Members of CUPE 2424 stood strong and united throughout four weeks of the strike, and our solidarity was on display again Tuesday night as we voted ‘yes’ on the tentative agreement between Carleton University and the Union.

The membership ratification vote was attended by over 600 members who voted overwhelmingly in favour of the agreement. Members returned to work on Wednesday, April 4th, 2018

The fight for pension rights resonated with so many people. We received amazing and unparalleled support from every group and association on campus – students, faculty, security workers, maintenance and engineers – from the media, from groups outside Ottawa, and from outside Canada’s borders.

This bolstered our determination to defend our pension rights and the agreement that we ratified is evidence that we fought the right fight. The deal establishes provisions around pension rights in our collective agreement, guarantees the defined-benefit portion of our plan, and establishes a joint pension review committee, whose mandate includes a review of plan governance.

But perhaps most importantly, our strike has put pension rights on the agenda for other unions at Carleton, and beyond. Now, we’re all more aware of how important it is to be vigilant about protecting pensions for ourselves and for those to follow. We will continue to support each other and demonstrate our solidarity with others who take up the fight.